In short, going back to one of our first assignments, please remember that color is the visual byproduct of the spectrum of light as it is either transmitted through a transparent medium, or as it is absorbed and reflected off a surface. Color is the light wavelengths that the human eye receives and processes from a reflected source. In our class, we are using acrylic paints so we are dealing with color as it is absorbed or reflected back to our eyes. (The digital and film realm, including photography, deals with transparency.)

We will explore these in more detail below. All of the definitions and explanations apply to the light absorption method.

Hue is more specifically described by the dominant wavelength and is the first item we refer to (i.e. “yellow’) when adding in the three components of a color. Hue is also a term which describes a dimension of color we readily experience when we look at color, or its purest form; it essentially refers to a color having full saturation, as follows:

When discussing “pigment primaries’ (Red, Yellow, and Blue), no white, black, or gray is added when 100% pure. (Full and complete desaturation of a hue is equivalent to true black.)

In a standard color wheel, like the ones we first started out with, the colors shown are considered “mid value”. They are representations of color visually approximate to being in the middle center of a value scale. 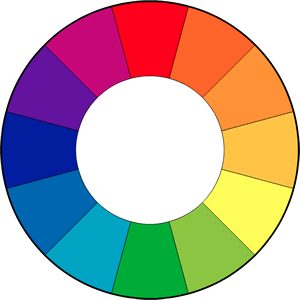 For a concrete example of how to use these terms correctly, let’s focus on the primary red. A mid value red would appear as the red above show in our color wheel. A high value red would have much more white mixed into it and appear as a light pink. A low value red would have a darker appearance. This can be accomplished by mixing some black into it, or mixing the complementary of red into it, which would be green. The result we be a dark red that would read either as a deep rust or a muddy brown, depending on the quality of the pigments being used. (I personally prefer to mix my own darks via complementary color combinations rather than using black straight out of the tube. The results in term of hue complexity will be much more sophisticated. Black straight out of the tube can be very shallow in hue and can have a graphically flattening effect in painting.)

Saturation defines the brilliance and intensity of a color. When a hue is “toned,’ both white and black (grey) are added to the color to reduce the color’s saturation. When a color has high saturation, the pigment intensity is vivid and bright. When a color is desaturated, or low saturation, the color appears to be “greyed out” or muted. Please note graphic below to help visualize what a desaturated primary red would look like. (See the second row, right hand side.) 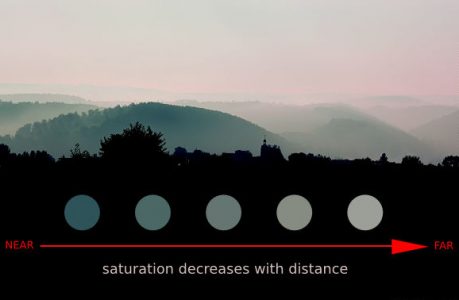 This week’s assignments will all be in your journals so we can save your larger mixed media paper for our remaining assignments.